Ciaran’s farm is based in Kealkil, Bantry, Co. Cork. He founded his pedigree herd in 2004 with his wife Mary, with a maiden heifer Parkboy Wilma born 2003 and an in-calf heifer Aherlow Lady Jess born 2002 which both are still in the herd producing a calf every year.

Currently Ciaran farms 18 cows part time and also is an AI technician for Munster AI along with scanning cattle and doing weight records for the ICBF. On his own farm he sells bulls on for breeding and keeps the heifers. In the last two years he has exported heifers and a bull to Spain.  He has an Autumn calving herd and all his cows are bred to AI. He uses traditional Angus bulls including Cartenroe Ernie, Shankill Max and Bohey Jaesper. The offspring from his herd are suitable for the dairy herd for there easy calving and easy fleshing.

The highlight for Ciaran since he started breeding pedigree Angus was winning the overall Champion Angus bull at Fermoy Mart Bull Show and Sale in 2013 with Kealkil Prime Lad L380 (pictured above).

Ciaran is also Chairman of the Munster Aberdeen Angus Club which organises the Munster Aberdeen Angus Club Bull Show and Sale at Bandon mart annually. The Club also organise a herds competition, which has a class for small, medium and large herds. In 2013 Ciaran finished second in the medium herds. The herds competition is sponsored by Angus Beef Ireland.

Ciaran’s herd has a high health status which means that is free from Johnes disease, BVD, IBR and Lepto. Ciaran’s herd is obviously well bred and top quality. The male offspring of his herd will be crossed with the dairy herds and this offspring will be sent to the factories to be certified Angus beef through Angus Beef Ireland.

Ciaran has two children, Liam who is 9 and Ella who is 7. 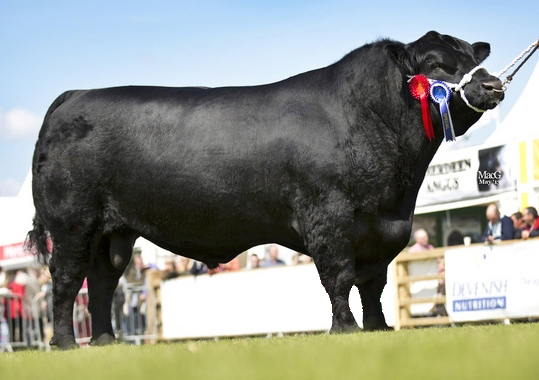 Albert and his wife Jennifer farm a pedigree herd, producing offspring for pedigree herd farmers and for producers who supply to the meat market. The herd was established in 1984 and currently has 60 breeding cows and 3 stock bulls.

Of the offspring, the males are sent to breeding, commercial and pedigree herds and females are either retained for herd stock numbers or exported to markets such as Portugal, Germany and Russia for their breeding lines.

Albert says his line is bred for

Albert was recently nominated by the association for the Champion of Champions which was held at the RDS although Albert says the highlight in showing cattle was winning the first All Ireland for overall Champion. Karona (pictured) was purchased privately in November 2011 from the UK.  He is breeding well with semen being sold through Dovea and recently retired from showing.

Albert was the president of the Aberdeen Angus Society in Scotland in 2011. He has noticed that whilst cattle have got bigger, they have not lost their shape. He sees a large increase in popularity of Aberdeen Angus as it’s sought after more and more by both housewife and restaurants.

We use cookies to ensure that we give you the best experience on our website. If you continue to use this site we will assume that you are happy with it.Ok